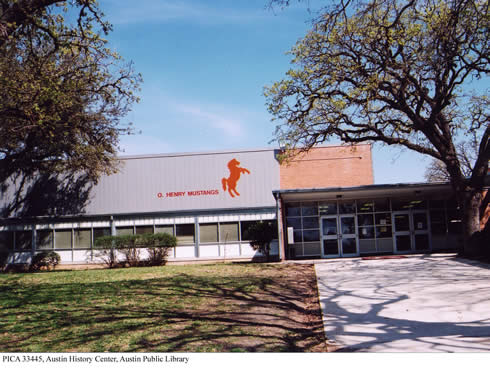 I interviewed Emily M., a former O. Henry student who went to school in the 1980’s. I’m interviewing her to compare O. Henry from the past to the present.

Lucian: How did O. Henry look? Did it look different?

Emily: The building at O. Henry was the exact same that it is today.

Lucian: Was it challenging for you at O. Henry? If so, how?

Lucian: How long was the school day?

Lucian: How many grades were there?

Emily: There were two grades: 7th and 8th grade.

Lucian: How many periods in a day were there?

Emily: There were 6 periods in a day.

Lucian: Did you use the lockers? If so, what did you put in them?

Emily: Yes, we used the lockers. Mine was in the 100 Hall. We stored textbooks that we had for each subject. We used to decorate the inside of any sports player’s locker before any games.

Lucian: How many kids went to school at O. Henry at the time?

Emily: There were maybe 450 kids that went to school there.

Lucian: Did you like going to school at O.Henry?

Emily: Yes, I loved going to O.Henry because I had lots of friends, and the teachers were great for the most part. I didn’t feel like a kid anymore.

Lucian: How old were you when you started going to O.Henry?

Emily: I was 12 years old when I started going to O.Henry but shortly turned 13.

Lucian: What was your best memory at O.Henry?

Emily: My best memory at O.Henry was making cheerleader for 8th grade.

Lucian: What was your worst memory at O.Henry?

Emily: My best friend did not make cheerleader.

Lucian: Did you hate any of your teachers?  If so, why?

Emily: I did not like the vice principal, Mr. Berra, because he was scary and mean at lunch.

Lucian: How was your experience at O.Henry different from mine?

Emily: My experience was different from yours because I started in 7th grade. It was the 1980’s, so times were just different.