Will a new justice on the Supreme Court threaten the rights of the LGBTQ community? 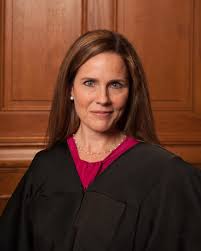 November 2020 – On September 18, 2020, America lost an inspiration, a role model, and a woman who little girls looked up to. Her name was Ruth Bader Ginsburg. Ruth dedicated her whole life to protecting the rights of women, men, and the LGBTQ+ community. She was the second woman on the U. S. Supreme Court and fought cancer like a boss until she devastatingly passed at the age of 87. President Donald Trump nominated Amy Coney Barrett as the justice to take Ginsburg’s place.

Before the Supreme Court, Barrett served on the Seventh Circuit and was confirmed in 2017. Though Barrett replaced Ginsburg, she has beliefs of her own as we all should. However, as a Supreme Court justice, your job is to be fair. Since her beliefs lean towards the Republican or Christian side more, the LGBTQ community is scared. CNN stated that “when she was confirmed to the court, many LGBTQ+ people feared their own rights were going to be taken away.” Some even fear the right of marrying the one they love will be taken away from them.

The reason they were panicked was because when she was being confirmed, she used the phrase “sexual preference” twice. “Sexual preference” is an offensive and outdated term, and it suggests that one’s sexual orientation is a choice. Many in the LGBTQ+ community were offended.  Later she apologized for the incident and stated that she “certainly didn’t mean and would never mean to use a term that would cause any offense to the LGBTQ+ community.”

You may be thinking why are they so scared if she accidentally used a phrase that she apologized for?  Well, maybe we can’t be sure of her future, but if we look at Barrett’s past, there is more that threatens the LGBTQ+ community. For example, in 2015, she signed a letter describing marriage as “indissoluble commitment of a man and a woman” suggesting that she might not protect their right to marry. In addition, when discussing a prominent  case regarding a trans student’s rights, Barrett misgendered the student involved as “someone who is physiologically a boy but identifies as a girl.”

The day after election day the court will argue about the issue of whether or not a taxpayer funded adoption agency can turn away LGBTQ+ families. This will be the first test to see if she poses a threat to the LGBTQ+ rights movement. Same sex marriage was confirmed legal in 2015 and should stay that way. Marriage is a choice and a right. You should be able to marry the one you love despite your race, sexuality, or religion. She may have different beliefs from me, but everyone deserves to have an opinion of their own. Besides the fact that she has a different past and is showing some bias towards certain belief systems, she could make a fine justice because, after all, she is intelligent and is not racist. I just hope she does not put her personal opinions before others’ futures in the courtroom.